By Unique Japan Tours on 12/08/2015 in Knowledge, Art, Japan, Autumn, Cherry blossom, Culture, Shrine, Festivals, Matsuri, Takayama, Beauty, History
In our last blog post we talked about Takayama, one of our favourite cities in Japan. Located high in the Hida Mountains, its home to one of Japan’s most popular festivals. The Takayama Festival actually refers to two festivals, the Takayama Spring Festial, or Sanno-sama Festival, and the Takayama Autumn Festival, or Hachiman Festival. Though separated by 6 months, the events that happen during the festivals are remarkably similar. Keep reading for more!

Before we get into the details of what happens in the festivals, let’s talk about how they got started. The first mention of the Takayama Festival was in a letter written in 1692. This letter states that the Festival has been held for the last 40 years. The accuracy of this letter is open to debate, but it’s the closest anyone has to a starting date.
But how did the yatai, or beautiful floats, associated with the festival come about? Long ago, rich artisans and merchants in Takayama were forbidden from using their wealth to buy bigger houses, richer clothes or other status symbols of their social standing. Instead, the merchants came together and formed several small communities, and each community used their pooled money to build a flat for the community. With Takayama being home to incredibly talented artisans and carpenters, the merchants began to one up each other, always looking to build more beautiful, more impressive floats.

The floats of the Takayama Festival are one of the main attractions. Each festival, both spring and autumn, have about a dozen floats each. The floats are put on display during the festival, and are decorated with carvings, dolls, thick, woven curtains, bamboo blinds and lacquerware. Overall, the floats are elaborately decorated and uniquely beautiful. Every part of the floats are decorated, not only on the outside, but inside the doors and even under the roofs!
The colours and beauty of the floats, combined with the natural beauty of the cherry blossoms in spring, and the autumn golds and reds of the leaves, reflecting on the surfaces of the many small rivers that criss-cross Takayama is an unforgettable experience.

The Spring Festival, which happens between April 14thand 15th is a celebration of the end of winter. The snows are melting, the cherry blossoms are coming out, and everyone is looking forward to the warmer weather ahead.
The Autumn Festival, on October 9th and 10th, is the sign that the locals should start to get ready for winter. The warm weather is starting to fade, the leaves are changing colour, and people are preparing for the snows that will come in a few months.
Regardless of which festival you go to the events are mostly the same. From morning until mid-afternoon, the Festival Floats are displayed on the streets of Takayama. Some of the floats have complex mechanical dolls called karakuri ningyo, and they put on a performance in the mid-morning.
In the early afternoon, there is a parade through the town, with the portable shrine, or mikoshi, being carried around the town during the day. Finally, in the evening, the floats are adorned with hundreds of paper lanterns. This is considered, by many, to be the highlight of the festival. 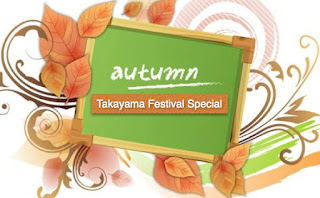 The Takayama Festival is amazing. So amazing, in fact, that we have arranged a special, 8 night tour, with the Festival at it’s heart. This special Autumn tour is a once in a lifetime chance to get the best Takayama has to offer in Autumn. Whether you go during when the snows are melting in spring, or when the cooler winds of autumn blow, the Takayama Festival is part of our April and October Japan Discovered small group tours. Alternatively, we can arrange a self-guided tourwhich takes in the Takayama Festival, and any of the other incredible sights in Japan.
Cities of Japan – Takayama
Towns of Japan: Kawayu Onsen